At the beginning of the 19th century Christmas was hardly celebrated. Many businesses did not even consider it a holiday. However by the end of the century it had become the biggest annual celebration and took on the form that we recognise today. 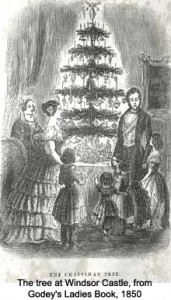 Many attribute the change to Queen Victoria, and it was her marriage to the German-born Prince Albert that introduced some of the most prominent aspects of Christmas. In 1848 the Illustrated London News published a drawing of the royal family celebrating around a decorated Christmas tree, a tradition that was reminiscent of Prince Albert’s childhood in Germany. Soon every home in Britain had a tree bedecked with candles, sweets, fruit, homemade decorations and small gifts. 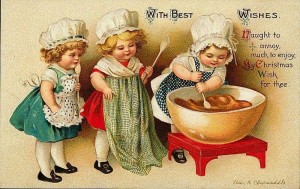 In 1843 Henry Cole commissioned an artist to design a card for Christmas. The illustration showed a group of people around a dinner table and a Christmas message. At one shilling each, these were pricey for ordinary Victorians and so were not immediately accessible. However the sentiment caught on and many children – Queen Victoria’s included – were encouraged to make their own Christmas cards. In this age of industrialisation colour printing technology quickly became more advanced, causing the price of card production to drop significantly. Together with the introduction of the halfpenny postage rate, the Christmas card industry took off. By the 1880s the sending of cards had become hugely popular. 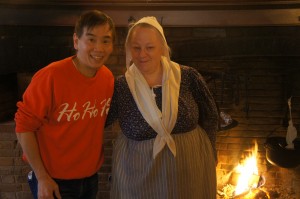 Another commercial Christmas industry was borne by Victorians in 1848 when a British confectioner, Tom Smith, invented a bold new way to sell sweets. Inspired by a trip to Paris where he saw bon bons – sugared almonds wrapped in twists of paper – he came up with the idea of the Christmas cracker: a simple package filled with sweets that snapped when pulled apart. The sweets were replaced by small gifts and paper hats in the late Victorian period, and remain in this form as an essential part of a modern Christmas. 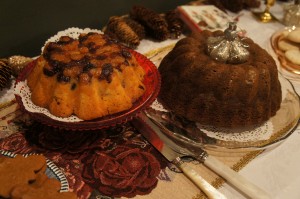 Decorating the home at Christmas also became a more elaborate affair. The medieval tradition of using evergreens continued, however the style and placement of these decorations became more important. The old custom of simply decking walls and windows with sprigs and twigs was sniffed at. Uniformity, order and elegance were encouraged. There were instructions on how to make elaborate synthetic decorations for those residing in towns. In 1881 Cassell’s Family Magazine gave strict directions to the lady of the house: “To bring about a general feeling of enjoyment, much depends on the surroundings… It is worth while to bestow some little trouble on the decoration of the rooms”.

Gift giving had traditionally been at New Year but moved as Christmas became more important to the Victorians. Initially gifts were rather modest – fruit, nuts, sweets and small handmade trinkets. These were usually hung on the Christmas tree. However, as gift giving became more central to the festival, and the gifts became bigger and shop-bought, they moved under the tree. 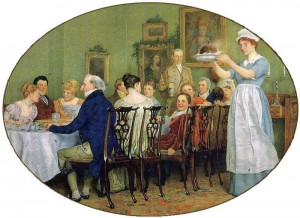 The Christmas feast has its roots from before the Middle Ages, but it’s during the Victorian period that the dinner we now associate with Christmas began to take shape. Examination of early Victorian recipes shows that mince pies were initially made from meat, a tradition dating back to Tudor times. However, during the 19th century there was a revolution in the composition of this festive dish. Mixes without meat began to gain popularity within some of the higher echelons of society and became the mince pies we know today.

The roast turkey also has its beginnings in Victorian Britain. Previously other forms of roasted meat such as beef and goose were the centrepiece of the Christmas dinner. The turkey was added to this by the more wealthy sections of the community in the 19th century, but its perfect size for a middle class family gathering meant it became the dominant dish by the beginning of the 20th century.

While carols were not new to the Victorians, it was a tradition that they actively revived and popularised. The Victorians considered carols to be a delightful form of musical entertainment, and a pleasure well worth cultivating. 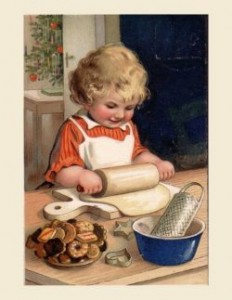